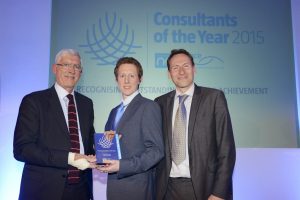 A Derby Chartered Structural Engineer has been named Young Consultant of the Year in the annual awards organised by the Association for Consultancy and Engineering and New Civil Engineer magazine.

James Thomson (31) is the Director in charge of the Derby office of Civil, Structural and Highways Engineering consultancy GCA in Green Lane, St Peters Quarter.

Mr Thomson was one of four shortlisted professionals for the prestigious awards which were announced at an event at Claridge’s Hotel, London.

He said: “It was an honour just to be shortlisted so I was delighted to then be named as the winner of this award.”

“I was the only shortlisted candidate from a smaller regional firm, and past winners have typically come from large multi-national companies.

“The feedback from the judges was they were impressed with the technical quality and diversity of projects I am leading throughout the UK.

“I entered the awards to fly the flag for regional firms and the benefits that regional projects bring to local communities, so I am very proud that this has been recognised.”

Mr Thomson joined GCA’s head office in Green Lane four years ago.  The company also has offices in Leicester, Stafford and Warwick with an extensive client portfolio of commercial and residential projects.

He was promoted to Associate Structural Engineer two years ago and appointed Director in charge of the Derby office six months ago.

GCA Managing Director Nicky Collett concluded: “This is a thoroughly justified award.  James is passionate about this work and we are extremely proud that he has been recognised in this way by the industry’s professional body.”