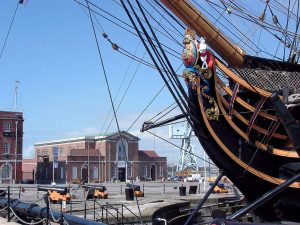 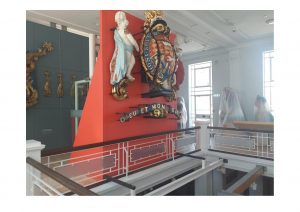 Find out more information about some of our other work on historical and conservation projects here .

National Museum of The Royal Navy

On 20th June 1815 a letter was written by the Royal Navy’s Board of Admiralty instructing the production of a replica figurehead sculpture which was to be made on the Isle of Wight. This was to be an exact copy of the now 206-year-old original figurehead consisting of two angels, supporting the UK royal coat of arms, surmounted by a crown, and motto below.

In November 2019 the northern building of the historic dockyard was closed to enable its refurbishment as the Victory Gallery.

The purpose of the Gallery was to provide an interactive display on the preservation of
HMS Victory. Also featured in the new museum were the figureheads of historic Warships.
The centre-piece of this display being the 19th Century replica figurehead of HMS Victory which was required to be mounted at the end of the long axis of the central atrium, shrouding the elevator.

In September 2020 GCA were contacted to provide the structural design for the support of the figurehead, which we undertook. Not only considering it’s final usage but, also, installation.

To assist in the design process, a 3D laser scan of the figurehead was commissioned by the client, at the request of the design team, in order that all support points could be precisely located. This ensured that once all parts were brought together, modification could be limited, or completely avoided.